With 1.FC Sand struggling with a growing list of Injuries, they are also struggling to pick up points against lower rated teams in the Bayernliga Nord. Now dropping down to the accustomed 14th place, Trainer Dieter Schlereth needs to find a way to motivate his available squad to fill the void. The clear missing pieces of the chain are Joe Bechmann (injured) and Danny Schlereth (Injured), which hinders the normal flow of play for the “korbmacher 11”. Bachmann is listed as “Probable” in the next match against ATSV Erlangen on Saturday, but is expected to play.  ATSV is expected to listed as the favourite with a record of 2-2-1. 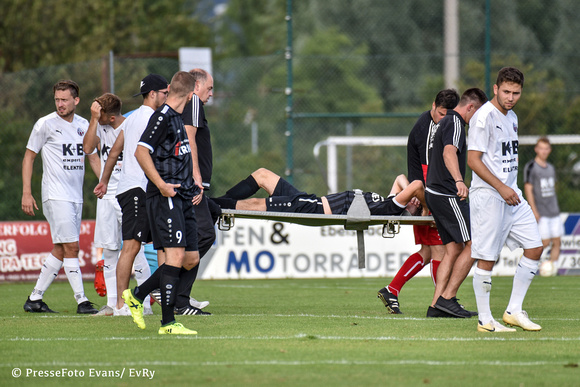 Image: Andre Schmitt (1.FC Sand,#19) being carried from the field, during the match against ASV Cham on 03.08.2019, after tearing his Achilles tendon.

Christian Michl’s FCS II celebrates a huge win in their first Bezirksliga derby against the DJK Dampach; this win also marks the first win for FC Sand II in the Bezirksliga Ost. Thiemo Persch (DJK, #13) started the scoring early with a goal in the 13th minute to give the Dampfacher a short-lived lead. A penalty shot awarded in the 25th minute, giving Dampfach a chance to regain the lead, but the shot that beat Keeper Fabian Zehe didn’t beat the post. Julius Neundörfer then shined with his double pack, hitting the net in the 21st and 37th minute. The uneventful 2nd half produced no goals, allowing Sand to edge out the DJK with a final of 1:2. 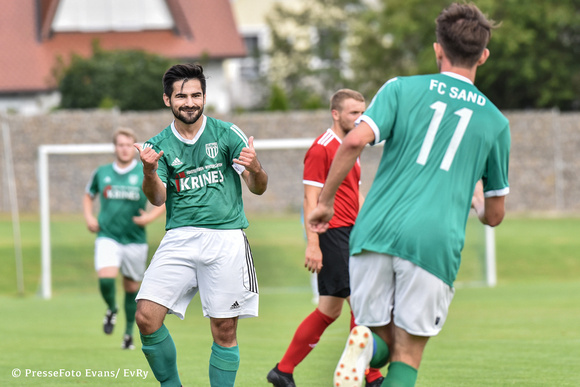