Baumi Game Winner!!!Image: Robin Baumgärtner (DJK Dampfach, 25) scores an Empty-Net goal in the 90’+4. The Goalie was pushed forward for help with a corner kick in the final seconds and Dampfach countered directly after the kick.

The DJK Dampfach still remains the only unbeaten team left in the Bezirksliga Unterfranken Ost. Dampfach currently sits with an impressive six wins and two draws. The last few showings from Dampfach were solid, letting Trainer Oliver Kröner celebrate at the end of the match - DJK Dampfach got 13 points from the last five games. 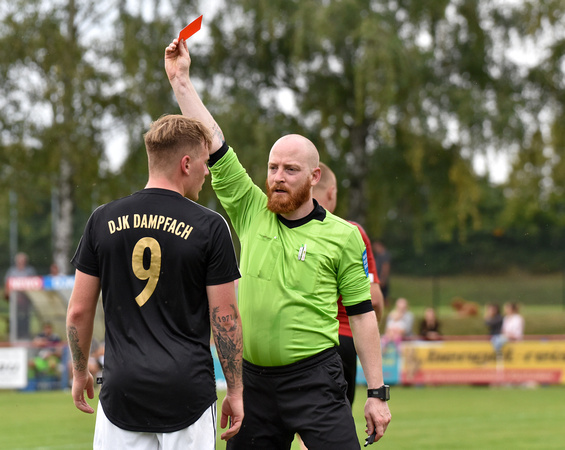 Red Card for Heppt!Image: Leon Heppt (DJK Dampfach,20) gets sent off with a direct Red for kicking at a defensive player after the ball was out of bounds.

Foremost, the offensive side of the DJK Dampfach must get the TSV Münnerstadt under control and effectively move the ball forward through the midfield. On average, Dampfach hits the opponent's net more than twice per game. Patrick Winter (DJK,11) will be returning  to the line-up after a short break, while Leon Heppt (DJK,20) will not be suting up for the next few matches due to being sent off the field with a red card for an unsportsmanlike foul. Heppt's block will also effect the team since they are scheduled to play position 3, SV/DJK Oberschwärzach, in the following week.